Further to the original posting, we’ve been made aware that the Trust sent a general events e-mail at approximately 16:30 this afternoon which included that below. We’ve no idea how people who are not using e-mail are being made aware of this. Here’s the relevant extract from the mail-out. 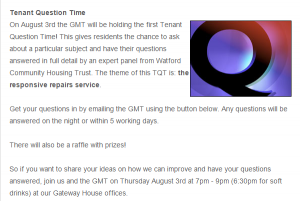 Whilst we applaud the idea, we are concerned that only a week after the Trust came in for some strong criticism at the MRA Open Meeting over the extremely short notice about work to the domestic hot water supply in Abbey View, they have left it until close of business on Monday to notify residents of this Q&A session which takes place three days later.

This was tweeted out by the Trust at 5pm today. No further information seems to be available other than the e-mail address shown. We will try and find out more, so please keep watching for further details. 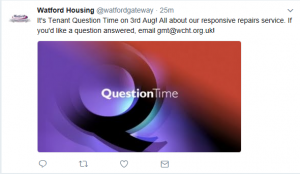 There were a lot of questions about how the metering in the high rise blocks on the Meriden would be carried out – it would appear there is more work for the Trust to do in this regard as when asked, Greg Whelan, Financial Controller for the WCHT said he was uncertain how this could be achieved. He undertook to contact Affinity to discuss it further and revert, but also advised us that he was going on annual leave and may not be able to get back to us for a week or so.

However, after looking at the Affinity website it appears that if the Trust do decide to stop being the middleman and all residents have to sort their own bills out, those residents living in flats, particularly the high-rise blocks, still will not have access to the low income fixed tariff, which is one of the Trust’s selling points for handing control back to Affinity.

If this does turn out to be the case, all residents who reside in Abbey View and Munden View and possibly the low rise blocks as well, must make sure our voices are heard in this consultation process since it would seem very unfair for everyone else to benefit financially if the high rise and low rise tenants are unable to.

Our regular Friday gathering – it’s a chance to meet other residents, have a chat to any of the committee members that are there and also to raise any concerns you might have. Refreshments are available and if the weather is nice, we might break out the patio furniture!

Hope to see you there!

An invitation to attend this event was shared on Facebook – it’s not being organised or run by the MRA so please direct all enquiries to the Trust, however we do think it’s important enough to publicise as it will have an impact on us all!

As you may be aware Watford Community Housing Trust was formed in 2007 via a transfer of stock from Watford Borough Council. As part of this transfer the Trust also inherited a collection arrangement for water charges between the Council and Affinity Water. In this arrangement Affinity Water charged the Council for water and sewerage for properties it owned, and this charge was then passed onto residents and paid alongside their rent account.

The Trust has recently reviewed this arrangement for a number of reasons which we have listed below:

Many of our residents have already opted out of the payment arrangement with the Trust and chosen to deal with Affinity directly. We do not believe that our remaining residents are currently getting the best service and deal possible including social tariffs which are available for those on lower incomes.

We are therefore undertaking a consultation with our residents and Affinity Water to explore the option of transferring all existing accounts from the Trust’s management to a direct arrangement with Affinity Water.

Please let us know if you have any questions and would like to attend.

We’re open for refreshments today. Pop in for a drink a chat or to raise any concerns you may have. You can even sit outside and just enjoy the sunshine.

Some planned items added to the upcoming events section – a talent contest, a classical spectacular and a party! Please check back regularly or follow us on twitter or our facebook page for the latest news.

Two items added to the Upcoming Events section – an open meeting and an awayday to a living history museum.

A short talk was arranged by WCHT and Herts. Fire & Rescue with an opportunity for residents to voice concerns and ask questions about fire safety in their homes, with particular emphasis on the high rise blocks.

Mr. Moran spoke in some detail about the main causes of fire in the home, which are smoking and cooking.

Since the introduction of the smoking ban in public places there has been something of a shift in peoples smoking habits, with more choosing to smoke outside which for residents of high-rise accommodation often means out on balconies. He suggested that those who did so may wish to consider a small bucket of water or sand to extinguish smoking materials in – there have been incidents where cigarettes have been discarded over the side of a balcony and have blown back on to a balcony elsewhere on the building and started a fire. He cited one such incident in 2016 at Munden View. Thankfully, nobody was hurt on that occasion. He also commented that the use of barbecue equipment or other cooking apparatus on balconies to be ill advised.

In respect of kitchens, the most common sources of fires in recent years had been unattended grills or hobs. He advised that build ups of grease should be avoided on or around surfaces and that residents should avoid leaving open cooking devices unattended. People should also be aware of things around the cooking appliances – combustible materials like tea-towels or a stray curtain which might be blown onto a heat source.

Electrical fires continue to be an issue – people should look out for signs of burning on plugs and chargers – if any signs are apparent then the device should be disposed of immediately. If any electrical appliances are causing mains to trip, they should be isolated and looked at by a competent person before being re-used as this is often a sign of something seriously wrong.

Mr. Moran also mentioned the ability to register your white goods (fridges/freezers/washing machines/dish washers/tumble driers) with the manufacturers when installed. Doing this means that owners can be contacted if any issues are found with equipment later on and remedies need to be made or product recalls are issued.

He also mentioned people being aware of how and when they used candles  –  consider surfaces they place the items on before lighting them and also look at what may be around the candle – is there anything that could catch light?

If you have any concerns about fire safety in your home, the Brigade are able to come and talk to you – give them a call to arrange a visit.

In respect of the fire strategy for the high rise blocks, he explained that a “stay put” policy had been designated and that the buildings had been designed and built with this in mind. Whilst it was understood that residents may wish to evacuate if they became aware of an incident in a neighbouring flat and that it was absolutely their option to do so, mass evacuations can be problematic for the Brigade when they come to tackle the blaze. For more information on “stay-put” and high rise fire strategy in general, please see the Herts. Fire and Rescue website for their  “High Rise Flats: What you Need to Know” pages.

Advice was given on the regular testing of the smoke alarm in each flat – residents should test them at least monthly and report any failings to the landlord immediately. Hertfordshire Fire & Rescue will come and fit battery operated alarms free of charge if asked, should any residents have concerns.

Mr. Moran also stated that the responsibility for maintaining a safe building falls to the landlord and that any issues or concerns should be reported to them for resolution – for example internal fire doors that don’t close or a fire exit door that won’t open or is blocked.

There was then a period for residents to ask questions of the brigade and also several members of the WCHT on an individual basis.

We’ve added some detail on our aims and also our constitution in full for you to read – just click on the relevant headings above.

As things develop it’ll become the channel for breaking news concerning the Meriden and possibly also for other things in Watford and the county that have a local impact. Please tweet us with anything you think the community should know about.